How Do Funerals Take Place in Military Services?

Funerals are ceremonies which are conducted in a very tragic environment. However, military funerals are a great loss not just to the family but to the country for which a soldier, marine, sailor or airman died. This is why military honors are held to be of great importance are the funeral procedures have to be done in a systematic and respectable manner.

What are military funeral honors? 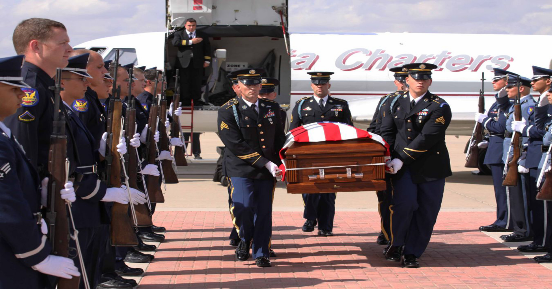 What are British military funeral procedures?

During a death in a military service in the United Kingdom, the following procedures are done:

1. The casualty is required to be reported.

2. The Joint Casualty and Compassionate Centre (JCCC) then handles follow-on-actions such as repatriation of the demised to the UK, the registration processes for the death certificate and other army requirements and marking the grave.

3. The United Kingdom Service Personnel and Veterans Agency (SPVA) is the one-point contact for families who have suffered such a tragic death for any financial help. They guide the family pensions, allowances, compensations and other payment issues.

4. The bereaved families which require help with the funeral, marking of graves and other such related procedures can directly contact the JCCC.

5. Any expenses which are required for a funeral is done through a Service Funeral where all necessary costs are borne by the JCCC. They make arrangements for the following:

Who gets a 21 gun salute at a funeral?

Firing guns at funerals are done as an act of respect, salute, and remembrance to the deceased veteran. Usually, 3 volley shots are fired to honor the deceased serviceman. However, people often mistake this as the 21-gun salute which involves a 21-minute gun firing at noon. The following site shares information on the best deals to buy 5.56 ammo online at best quality which can be used in army or police forces.

The significance of firing through rifles is that the deceased was well taken care of and now the military team is ready for resuming their duties of the field. Even after these details, a question arises that are all veterans entitled to a military funeral? To tell you the truth, it is mandated by the law that the rendering of military funeral honors must be done free of charge for any deceased veteran who has been a member of the military forces.

We in ComparetheCoffin believe, care and respect our servicemen for their undying love for the nation till their very last breath and are now at your service.

Why families choose American Caskets for their loved ones?

Blessed Are Those Who Mourn