Here at Comparethecoffin.com we absolutely love people doing new and interesting things in the funeral business, When we came across these guys we absolutely have to do a feature on them Along with carrying the coffin, the truck can accommodate up to 6 additional passenger Prices starting at around £600 – which isn’t much more than a standard hearse would cost, tell us what you think? We love it!

A young boys dream that became more than a reality! Clive Shaw grew up in a Lincolnshire mixed dairy and Arable farming family and in 1991 obtained his HGV license, shortly after Clive got as near as he thought he ever would to fulfilling his dream when he purchased a Volvo F10 and juggled part-time haulage work with farming. This dream came to an abrupt end quite quickly when his truck was written off by another haulage firm. That was Clive’s dream shattered. He took a job in 2006 working for Rolls Royce Bergen Engines, traveling the world as a service Engineer on Marine Diesel Engines, 5 years later Clive’s dream was to become a reality. Sat bored and alone one afternoon in a hotel room, rain pouring down outside Clive found himself looking through American Truck classified ads. He saw a Red Kenworth W900L Aerodyne American Truck, a proper classic American Truck, it fitted that dream that Clive so often thought about, it was everything in his mind that a classic American truck should be. After chatting with Colin from R &amp; R Trucks who imported the truck, on his return to England Clive paid Colin a visit and agreed to purchase the truck. Having been originally owned by a farm in Pikeville, Tennessee, the exterior was resprayed before leaving the States but the interior was far from clean! Clive collected the truck on 5th June 2011, an expensive boys toy but a dream come true, Clive was the proud owner of an American Truck but he had no idea at that time that Clive Shaw Trucking was about to take over his life! 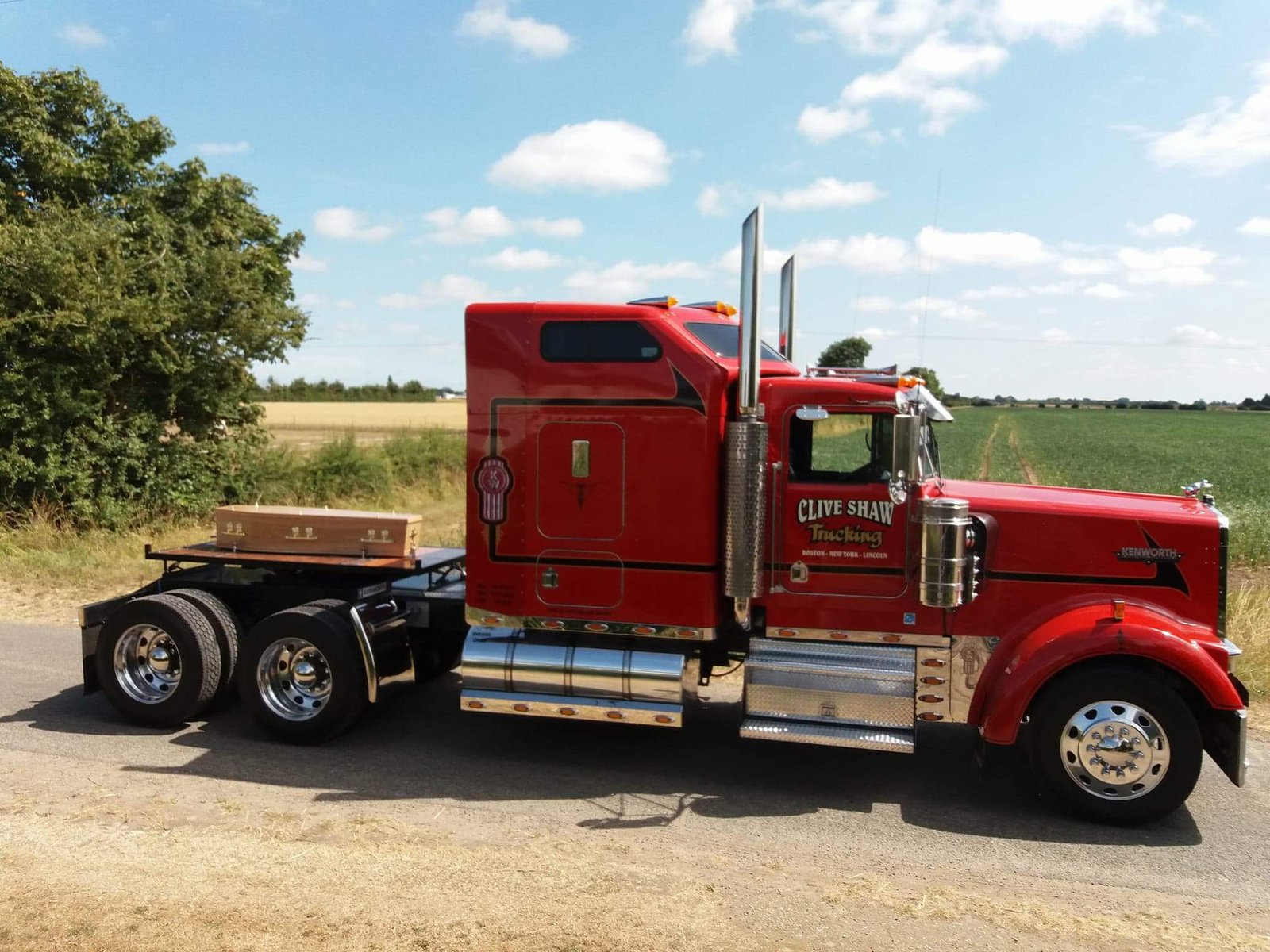 In 2012 Clive entered Truckfest Newark, the last show of the year at that time and a complete unknown venture. The Truck stood pride of place on the Ice Road truckers stands and Clive was given the task of driving Lisa Kelly round the showground in his truck. He had a great weekend, met a number of new people and came home with a very pleasing 3rd place in best kept Supertruck category. This gave Clive the bug to make the truck the best he could and attempt to take the Best kept Supertruck award. Work commitments have always kept Clive from taking the truck out to all events, but he did manage to get the truck to Scotland in 2012 where he won 1st place, Best Kept Supertruck.

A phone conversation in January 2013 again with Colin from R &amp; R Trucks left Clive wondering. A matching pair!! But this time with a full ICT sleeper on the back!! This one had been a husband and wife home in the States whilst they transported cars from State to State. Could he really justify 2 expensive boys toys? a hat would be something different to anyone else and turn heads, 2 Red Kenworth W900L American Trucks, more than he ever dreamed of as a young boy! Clive couldn’t say no, so Colin and his brother Andrew set to work respraying and making all the brightwork for a matching pair! This venture was a year in the making from a phone call in January 2013 it was finally collected in February 2014. Clive had more than fulfilled his dream from a small boy who dreamt of owning an American truck to the only person in the UK to own 2 American trucks painted in matching livery!

Clive and his friend Neil took the trucks for their first outing together to Peterborough Truckfest in May 2014 and they have been a talking point ever since, it was the first time that someone had displayed 2 Supertrucks in matching livery at Truckfest, the trucks now have a huge following of people of all ages and walks of life who attend events up and down the country just to see them. The interest is phenomenal and they have won best kept Supertruck a number of times at different events.

Clive was then asked if the trucks could be used for a couple of weddings. Due to work commitments taking him out of the country for a minimum of 6 months a year, Clive was reluctant to commit to the events but did allow the trucks to be used by a couple of friends for weddings.

Late 2016 was the turning point, Clive decided that his 2 very expensive American Truck toys should maybe start to fund their own diesel! he put a few feelers out to different people, having 2 Supertrucks matching gave Clive an advantage, they are an overpowering force and do not enter anywhere quietly and unnoticed! And bookings for filming and photoshoots started to drift in.

Truckfest Driffield was a very quiet show, Jason Smythe Adrenalin Quad bike stunt Tour was the main ring feature, Clive was watching with Lesley and Neil. &lsquo;What a fabulous idea for Jason to jump over the trucks it would look impressive!’ Clive looked horrified, to begin with, but after his engineering brain worked out, he agreed to give it a go! we are now a regular feature of the Jason Smythe adrenalin Tour throughout the country with Jason now jumping over both red trucks as part of his show and some exciting new aspects to this for 2019 to look forward to.

Clive needed a new challenge! Truck shows were good fun but the initial excitement had dwindled away. The regulations had changed in recent years regarding importing trucks, now making it almost impossible to import them. That was to be Clive’s next challenge! Could he import and register a truck with all the new legislation? Clive favorite American Truck is a Kenworth W900, but maybe try this venture with something different, after all, Kenworths do tend to be more expensive and there was a chance that it would not get through registration which would make it an expensive ornament that could never be driven on the UK roads! Clives Black Peterbilt 379 drove onto UK soil at the end of October 2017 and was fully MOT and registered onto UK plates by January 2018. Clive had achieved his next aim which was to put UK plates on an American truck again. We have since helped a number of other people MOT and register vehicles in the UK who had previously given up hope of being able to register their vehicles.

Clive Shaw Trucking has gone from strength to strength, through 2017 with Weddings, Filming and photo shoots. We have also been the first American trucks to exhibit at the London Motorshow and met the Outback truckers in 2018. Early 2018 Lesley, Clive partner, asked Clive to make a coffin carrier to fit on the trucks, after much protesting and reluctance from Clive with comments like who on earth wants an American truck at their funeral! Clive gave in and designed and manufactured a purpose built a board which fits on any 5th wheel with all the rollers and pins, identical to traditional Hearse bed and a week later we had our first funeral booking! The feedback at the funeral was extremely positive people were amazed, it was so encouraging that we are currently manufacturing an all-weather covered hearse board for the trucks. We have a traditional Black Peterbilt 379 American Truck Hearse or a Clive Shaw Red Kenworth American Truck Hearse.

With his dream becoming a reality Clive wanted to give people the opportunity to drive American trucks. Clive is well aware that not everyone is in a position to make their dream come true and his aim was to make the trucks available to everyone. To facilitate this we now offer American Truck Driving Experiences at various venues throughout the country including Brands Hatch and Donington Park, they are available to the general public, we also accommodate group bookings and corporate days, Gift Vouchers are available in full or part payment of any of our products.

There are exciting times ahead for Clive Shaw Trucking we will be expanding on all aspects of our venture through 2019. The most recent addition to the fleet is a Kenworth W900b, this is not just any old Kenworth, this American Truck was purchased Brand New in 1985 by the Hollywood legend Burt Reynolds and used to tow his Nascar race trailer sponsored by Skoal Bandit. Harry Gant was the driver of car number 33 and 33 years later we have purchased that very truck with the aim of restoring it to its original condition. We are in contact with the original driver from back in the 80’s

We have taken the truck to a couple of events including American Speedfest at Brands Hatch which also holds the only British round of European Nascar racing. So the truck has gone back to its roots 33 years after it transported car number 33! The interest in this project quite phenomenal, from a wide spectrum within Euro Nascar racers, Smoky and the bandit enthusiasts as well as Burt Reynold fans through to the general public. Clive feels it would be a real shame for this truck to not be restored to its former glory. He also feels that due to the public interest it should be restored with the public being able to follow the story.

The Clive Shaw Trucking story proves that dreams can become a reality!